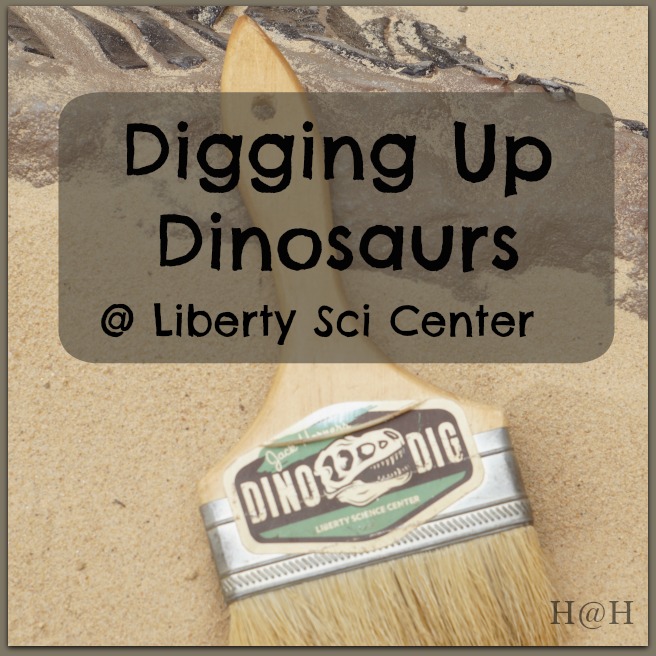 At some point, I think every kid wants to become a Paleontologist. Dinosaurs are fascinating… captivating our imaginations and taking us back to a world from long long ago. A place and time we can only piece together – quite literally through excavation efforts from scientists like the famous, Jack Horner.  At the Liberty Science Center, located in Jersey City, children are welcome to explore the Jack Horner Dino Dig excavation exhibit. {Parent Tip: Maybe don’t wear white. Just Saying.}

DISCLOSURE:  As a Liberty Science Center Blog Ambassador for the day, we had been provided admission vouchers for our visit. As always, the opinions expressed herein are strictly that of Homeroom At Home.

This hands-on temporary exhibit offers guests the opportunity to dig for dinosaur bones and eggs. The Jack Horner Dino Dig exhibit, updated since Jack Horner’s visit last year,  specifically reflects his excavation experiences and prehistoric discoveries.  Jack Horner is a legendary paleontologist who struggled academically, but stuck with his passion. Struggling with undiagnosed Dyslexia, his interest in dinosaurs began with his childhood curiosity in why Canada turned up “better” fossil findings than his home town of Shelby, Montana. He channeled his curiosity for dinosaurs into his senior year Science Fair Project… and won. You can hear him describe his fantastic break-through story and discuss the early part of his career in the video clip below with Hank Green of Sci Show. In this episode, you will also learn how birds are related to dinosaurs.

With over 50 bones buried in 35 tons of sand, there is plenty of digging for everyone. The science museum provides the brushes and off you go, provided the weather is cooperative. Under a huge canapy, your little diggers are protected from the direct rays of the sun. Be sure to check out the excavation map on the exterior wall with helpful information about what’s to be discovered under all that sand. And cafeteria and restrooms are close by in case of much needed breaks. The LSC staff of scientist were right there to dig along side all these young paleontologist wannabes.

Unlike other “dig” sites, the Jack Hormer Dino Dig uses soft brushes similar to paint brushes. The children aren’t drilling, scraping, or chiseling rock but simply brushing sand away. Caution your children not to brush sand into someone else’s exposed fossil finds.

Buried beneath all this sand is a 72 inch long Triceratops skull, plus many other species including Tyrannosaurus, Pachycephalosaurus and Maiasaura, which Mr. Horner discovered cared for their young’s nest & eggs. This is one thing dinosaurs have in common with today’s bird specifies, specifically penguins.

Jack Horner’s Dino Dig excavation site is included in the Liberty Science Center general admission. Hours of operation, exhibit info, parking, directions and more can be found on their website at www.LSC.org. I encourage parents to bookmark the site since there are great resources available on their pages.

The Dino Days of Summer adventures don’t stop there. Be sure to venture to the 4th floor for the Our Hudson Home exhibit space to include opportunities to practice removing fossils from brick blocks and the touch tank, where guest can touch an animal that’s been around since before dinosaurs… the hermit crab. For the little learners, Dino Tales offers story time. There is something for everyone in this interactive and informative summer program.

Got a cool dinosaur tee? Children wearing dinosaur themed clothing get a $5 discount off admission during the Dino Days of Summer!!  This is good for up to four children in a party. Be sure to mention the discount at the box office. And if that’s not enough excitement… keep an eye out for the 12 inch stuff T-Rex hidden in the museum. Each week, Rex is moved to a new spot and any child spying him during their visit earns a raffle ticket for a special dino surprise pack.

One lucky family will win a four-pack of tickets to the Liberty Science Center in Jersey City, NJ. Admission to Jack Horner’s Dino Dig is included in general admission. This prize pack is worth up to $87. Click on the Rafflecopter Giveaway below to enter the contest.

Here are the rules for entry and winning:

Winner will be selected at random by Rafflecopter. You have multiple chances of winning depending on the number of entries you’ve submitted.
Participants MUST live in the United States.
The contest will run from July 31, 2017 through August 11, 2017, 12am.
The winner will be announced on August 12, 2017 from Homeroom At Home.
Liberty Science Center will be notified of winner and directly issue 4 general admission tickets.
The winner must respond within 24 hours or another winner will be selected via Rafflecopter.
No purchase is necessary to win.