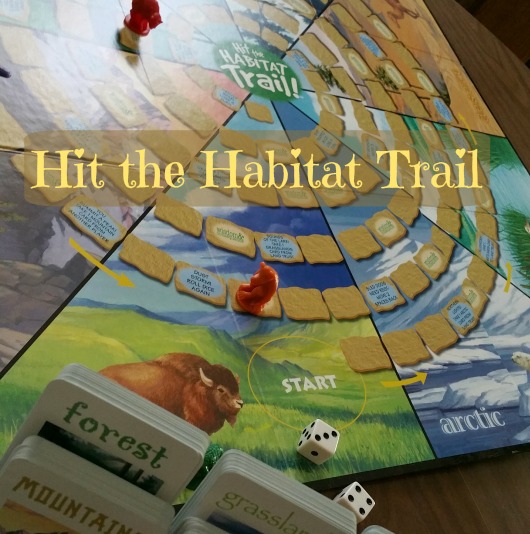 Animal and environmental trivia game for the whole family. Test your knowledge of the eight habitats and ecosystems.

Affiliate links are used in this article. The opinions expressed herein are strictly our own.

Hit The Habitat Trail is a family board game that brings you a bit closer to nature. Designed for 2 to 6 players, the game is played similar to many trivia board games by answering questions and moving around the board.  Players compete by correctly answering game trivia cards in an attempted to collect 2 cards from each of the eight habitats. The habitats are Ocean, Jungle, Forest, Wetlands, Mountains, Dessert, Grassland and Arctic.

Players who incorrectly answer the game questions, must roll the die and move backwards that number of spaces. Trivia questions range from animal behavior to habitat info to ecosystems and more. They offers a variety of information and trivial facts.

If a player is lucky, he or she will draw a “Wisdom” card, which can be traded for a habitat card for the habitat that player is current in or used to trade among players. These wisdom cards can be held for later use, as a strategic advantage. While the wisdom cards aren’t necessarily designed to offer advice, some of the cards have wording that might be helpful, insightful or inspiring. One example is “You use leftover water from any water bottle to water a plant”.

We like this game because of the different trivia questions and the fact that they are things learned in Science class or the Discovery Channel. There aren’t many points to the game, which make it easy to set up and get into. One thing we’d like to see improved would be the use of the habitats… perhaps questions specific to a habitat and its ecosystem of plants and animals… maybe offering a slightly more challenging concept. Otherwise, it is what you would expect from a trivia game and for that we appreciate Hit The Habitat Trail from Jax.