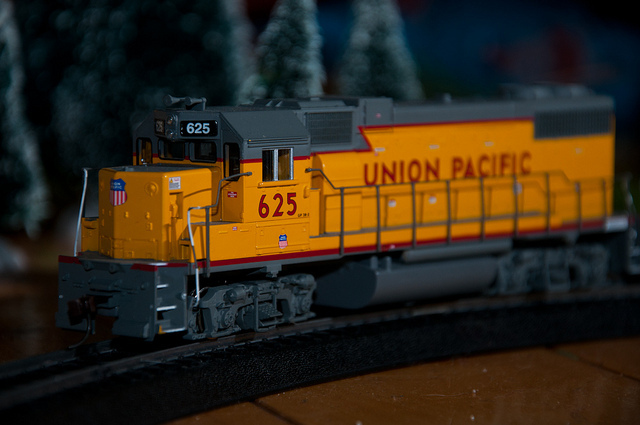 My Christmas Railroad – by Tom Hewitt

The countdown to Christmas morning is about the most exciting time of the whole kid year. Back in the day, (for me, “the day” was the mid 1960’s) the Christmas countdown didn’t start at Halloween. The official beginning was marked by the first sighting of Santa Claus at the Thanksgiving Day parade. Excitement grew exponentially as each day passed. Decorations went up, the temperature went down, and Mom would mark the Christmas Specials on the TV Guide magazine so we wouldn’t miss them. There were only six TV stations (why did we even need a magazine?!?) and there were no DVR’s, no DVD’s, and no do-overs. You missed that one yearly showing, and you were out of luck. And missing a Christmas Special like “The Year without a Santa Claus” or “Frosty the Snowman” could really dampen a kid’s Christmas spirit.

The Santa sighting and the festive decorations got the countdown started, but in my world, I knew Christmas was getting close when my Dad would come up from the cellar carrying that battered and torn box that held our Lionel Model Train set. Just seeing the box caused my Christmas fever to spike! To this day, I can close my eyes and smell the metallic oily residue that seeped into the cardboard over so many years of use.

I was born in 1964 to a working class family just outside the Philadelphia City limits. I suppose we were poor, not that I ever knew hardship. We were happy and life was simple. Dad worked two jobs and when home, was strict. Mom filled all voids and showered her four children with love and wisdom and the occasional buck or two when something special was really desired. Lord knows where she found that money.

Speaking of the Lord, we were raised Catholic, and let me tell you, those nuns spared no rod. Corporal punishment was doled out liberally, and if you were on the business end of the yardstick, you didn’t dare tell your parents. For telling your parents would bring down a second whuppin for being disrespectful to a nun. “What did you do to make Sister Izabitch punish you?” Dad would ask, as he laid another one across my bum. Like I said, life was simple.

Looking back, the model train set my Dad used to set up was also very simple. A small oval track that was tacked down to plywood and covered with this green sand paper. There was a black locomotive engine and a coal tender. There were a few box cars, and of course, a caboose. For scenery, we had three plastic models, all of which had all seen better days. The models—a gas station, a school house, and a nondescript factory were chipped and broken with pieces missing here and there. The power supply transformer sat at the far end of the platform. The long cord was black and red, frayed, and non-grounded. It heated up fast and smelled of ozone.

Dad would go over the finer points of running the trains. He taught me to “feather the throttle” and how to use the rerailer to line the trains up correctly. He added drops of liquid to the locomotive and like magic, pillows of white smoke would puff up out of the stack as the train thundered around the platform. Dad would hesitantly turn the controls over to my siblings and me, always keeping a cautious eye on everything we did.

When given the chance, our imaginations would run wild. We would move the buildings around the platform and pretend the train was pulling into different towns. We would tell stories about the town and the people who lived there and the hobos who “rode the rails”. “Far away” from the town, we would block the tracks (usually with Dad’s Zippo lighter) and force the train to a stop. Then, we became bandits, robbing all the cargo from the box cars. We would add up our “loot” to see who got the biggest haul. I would play for hours with those trains, all the way through the countdown to Christmas Eve.

I don’t know if it was a way to heighten the excitement of Christmas, or to shade the lack of gifts,–probably it was both– but Santa always took the trains with him on Christmas Eve. In their place in our living room, Santa would leave our Christmas tree, all brightly lit and decorated. The tree was a gift that Santa brought to our family each year.

Christmas at my house was always a time of great joy, but not one of material abundance. I don’t remember any particular gift I ever received for Christmas. We don’t remember things, we remember events. Christmas at my house was always an event. The model train layout my Dad created was not elaborate. It didn’t have to be. Life was simple. The model trains were simple, but the stories that we told and the memories that were created have been complexly woven into my warmest memories of Christmas.

Both Mom and Dad have passed away and I don’t know what ever became of that train set. No matter. Life is no longer that simple. My children are growing up in a world drastically different then the world I grew up in. I have my own set of model trains now, my own platform and models. I tell the stories of my youth and share the knowledge my Dad shared with me. My truest Christmas wish is that they will remember the time we spend playing together with these trains. I hope they will always see their childhood Christmas’s as an event.

If model railroading is something you enjoy, check out some of these railroad themed Holiday Events:

Brandywine River Museum of Art—1 Hoffman’s Mill Road, Chadds Ford, PA
“Breakfast with the Trains” One of the largest “O-Scale” model railroads in the country and you get an exclusive behind the scenes visit! Discover how the layout is created and the complicated upkeep needed to keep things running. Ticket includes a continental breakfast and children receive a Brandywine Railroad souvenir.