Playing with Pixar at The Franklin Institute 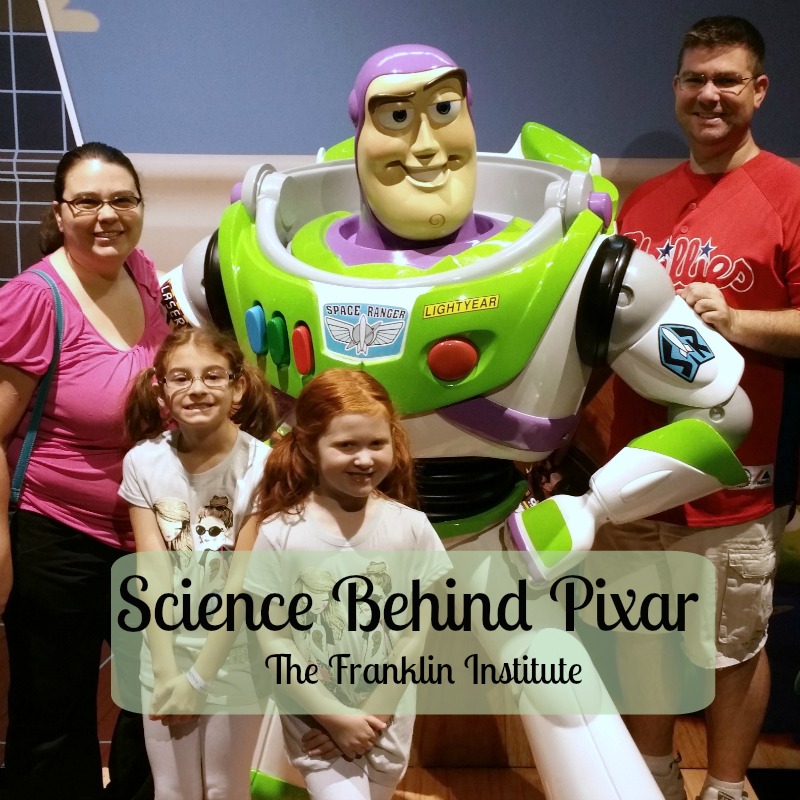 Many thanks to the Franklin Institute for providing us with media preview access of The Science Behind Pixar. All opinions expressed herein are strictly my own. #Sponsored This article may contain affiliate links.

The Science Behind Pixar

“This interactive exhibition showcases the science, technology, engineering, and math (STEM) concepts used by the artists and computer scientists who help bring Pixar’s award-winning films to the big screen.”

Go behind the scenes on the creation process for your favorite Pixar and Disney animated movies. Really get into the technical skill and science behind every detail… whether the bounce of Merida’s hair or Joy’s glow from Inside Out. Getting all those hilarious facial expressions for Mike Wazowski takes a great deal of skill. In fact every film presents a new challenge for the creative team.

Giveaway Details: Please note that the passes EXPIRE on August 21st. Passes include general admission to the Franklin Institute and The Science Behind Pixar exhibit. Be sure to check out their website for parking, hours, directions and daily schedule of events. Winner will be announced by email by noon on Monday, August 8th and will be required to email confirmation and mailing address via email to Barbara@HomeroomAtHome.com by 6PM Monday, August 8th. Passes will be mailed by Tuesday, August 9th. No purchase is necessary and we comply with all FTC and state regulations.

There are eight segments in the film making process, each having a unique spin on the end product and each require science of one form or another to make the magic happen. The Process starts with modeling. Did you know that each character is created in clay after the sketch is complete? And then the technician scans the model for a 3D digital version. It was pretty cool to see the row of favorite characters in clay models on display.

Now making these 3D digital models move is called Rigging. Alissa had a lot of fun manipulating Jessie’s eyes and eyebrows making all sorts of silly expressions. Rigging can easily turn into a complex process and it requires a fine art of balance between too many and too few rigged points.

One of the things I learned that I completely take for granted in the surfacing of objects. Surfacing is the process of giving an object dimension, aging, shine, etc. The best example would be things or characters like Wall-E in how he is rusty, dirty, dinged and so for. In the display below a scene from Ratatouille demonstrated with differing textures, shine and transparency an object could have to create different effects. This was a very interesting activity with a couple of puzzles to match. Fun stuff.

The Set and Camera exhibit displayed offer interactive ways to maneuver camera angles and play around with back drops. This is one of my favorite aspects in that I love the detail of set design and playing with camera angles and creativity.

Animation is probably the part most of us are familiar with, in that creators pose characters in accordance to the story line. Wow, that sounds so over simplified… but basically yeah, staging the pieces into movement. Then the simulation process was the most fascinating and actually a little hilarious, at least Mark and I got a chuckle… the art of simulation involves automating movement to make it look real. For instance clothing swaying or moving with a person is handled differently than animation. Just imagine all that fur in Monsters Inc. Wow.

And now that leaves Lighting and Rendering. Lighting is easy to understand AND fun to play with. Plus gave me a chance to snap a selfie with Dory. But seriously lighting is a key element in filmmaking as it directs the audience’s eye toward what to look at and effects emotion. Pretty cool. Rendering is the step at pulls everything together, taking all the programming and 3D element and converting to a 2D image for viewing pleasure.

With over 40 interactive displays, there is so much to make these lovable characters come to life on screen. These cousin… not to mention my Illustrator husband, had a fantastic time discovering stage by stage all that going into the magic of animated movie making. We highly recommend a visit before the exhibit concludes on Sept 5th. Be sure to check out the Franklin Institute’s website for hours, admission, directions, parking and daily schedule of events. This is only ONE of many amazing features at the Franklin Institute.

It is also worth mentioning that they have one of the best gift shops that feature a wide variety of relevant science and learning materials. No matter your passion… you can find something here to take home and continue the fun. Victoria spotted Stikbots in the Science Behind Pixar exhibit shop. She has 2 of these little guys and loves them. It is an inexpensive and fun way to introduce your children to filmmaking and stop motion pictures. Again, such fun!!